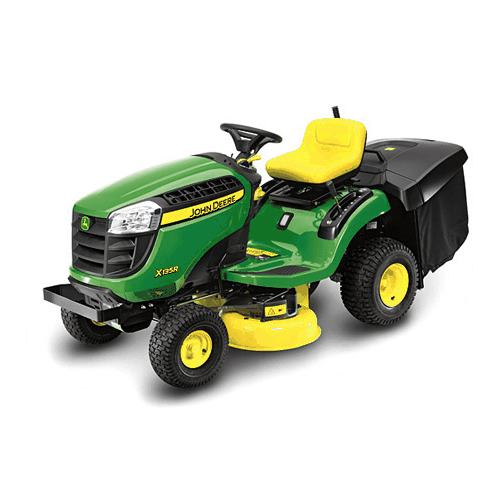 Our next item is another part of the X100 family. This time, we have a slightly more powerful model, the X135. If you though the first mower was impressive, you should definitely take a look at this one. Naturally, more features and better specifications warrant a higher price, and getting this mower is no picnic. If you’re planning on ordering X135, you’ll have to cough up about 2.900 pounds. However, if you think about it, 400 quid is not that much an increase, considering what you get for it.

So, what do you get? For starters, you again get a Briggs and Stratton engine, which is a standard engine for machines with John Deere. But, instead of a single cylinder, you get a double-cylinder 656cc engine. X125 could cut pretty much anything, but with X135, there is literally nothing that can stand in your way. The engine is capable of propelling the mower at a top speed of 5.5 mph, which isn’t all that bad for a ride on mower, ensuring that you finish mowing a lot sooner than you would with a conventional lawn mower.

However, the X135 has a smaller deck than X125. Like we said, X125 has a 42-inch deck, while X135 has a 36-inch one. But, X135 lets you adjust the deck height, and you can lower it to 25mm or you can raise all the way up to 89mm. The Edge Cutting System together with a deep dome deck design lifts the grass, allowing for much cleaner cut. The mower is also a 3-in-1, and you have the option of bagging (300-litre bag), mulching and discharging the grass.

But the X135 is more than just a mere tool. It’s also been built for comfort. Ride on mowers are meant for much larger lawns than regular mowers, which means you’ll be sitting in the seat for some time, so comfort is very much appreciated. That’s why X135’s footrests have been fitted with non-slip and anti-vibration footpads (rubber), so your foot would as comfortable as if you were driving a car. Not only that, but the X135 has an adjustable seat built in, with lumbar support, to facilitate and make more bearable those long hours of sitting.

All in all, John Deere mowers are among the best, and, of those best, the X135 is in the inner circle. Powerful twin-cylinder engine and quite comfortable to sit in, this mower is the go-to machine for anyone with an enormous lawn that needs mowing.