If you’ve got light felling to do, you’re after a good chainsaw for cutting firewood, or just need something with a bit more bite to do your pruning than a hand saw, an electric chainsaw is definitely the way to go. Click the link above to get started checking out some of the best models on the market today.

Along with every other power tool commonly used today, chainsaws have undergone something of a revolution in recent years, and now for the first time light to medium tree felling can be carried out without the hassle of an electric cable. Click above and read our battery powered chainsaws reviews to find out more.

For serious felling and lumber cutting work there is still no substitute for a decent petrol engine driven chainsaw. Luckily we’ve done the leg work finding the top models on the market so you don’t have to. Click the link above to check out our gas chainsaw ratings and reviews.

Chainsaws are a real lifesaver when it comes to cutting down trees and large amounts of lumber. In the days before they existed, the only options available were axes and hand saws, which despite being effective (especially when powered by more than one person) were always labour intensive, and also made the process of chopping wood painfully slow.

Cue the advent of the internal combustion engine at the turn of the 20th century and the subsequent powered automation of all manner of tasks, including agricultural work. Although the earliest chainsaws, like the earliest cars and lawn mowers, were heavy and inefficient, they were still leagues ahead of their traditional manually powered counterparts. These days of course technology has come on even further, tools are more light weight, and engines are more efficient than ever. At the same time the demands on these tools from the point of view of the average user remain relatively similar to those of 50 years ago or so. What this means is that a task involving a chainsaw is not only less strenuous, but also far quicker than it would have been just a few generations ago.

As with most types of powered garden tools, chainsaws are available in three broad sub types: Mains electrical, battery, and petrol/gasoline power. And like other tools each of these sub variants has their own set of distinct advantages and disadvantages. Let’s take a closer look: 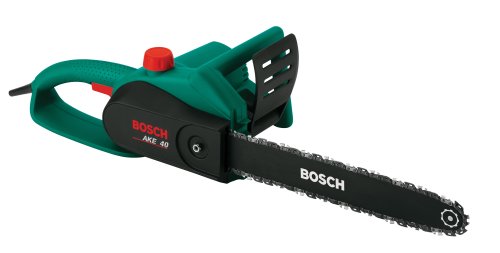 For small domestic jobs there isn’t really much need to deviate from using a corded electric chainsaw as these provide ample power for cutting down small trees and branches without any trouble. Unlike other power tools the need for mains power is much clearer, as long as the cord will reach then they are likely to provide more than enough power for the job (and if not, investing in an extension cable will solve the problem 9 times out of 10). Besides let’s face it, the need to use a chainsaw is only ever going to be occasional for most people. Having said all that, if you’ve got some really monstrous lumber to chop up petrol is always going to be the better option, but if you were wondering if electric chainsaws are any good, the answer is a residing ‘yes’, just as long as you don’t push them too hard.

Besides providing adequate cutting power for small domestic jobs, electric chainsaws are far quieter, require less maintenance, are easy to start (no nasty pull cables) and are more reasonably priced than battery or petrol powered chainsaws, again making them the obvious choice for the average user.

In terms of safety, electric chainsaws tend to have a smaller blade (or ‘bar’) length, meaning that kick back is likely to be less of a risk. Kick back is the name for what happens when the end of the chainsaw blade hits something that it can’t cut through easily, instead causing the chain to climb up the outside of the object and back in the direction of the user. If you don’t have good control over the chainsaw, or the blade is quite long then this becomes more of a risk. The biggest disadvantage in terms of safety electric chainsaws have is the inherent risk of cutting through the power cable during use, in turn leading to a risk of electric shock. Therefore real care is needed to keep the cable well clear of the blade when using a mains powered chainsaw, it should be one of the main things you are constantly mindful of.

Unlike traditional electric chain saws, cordless chainsaws are both far more versatile and free from the risks associated with electric cables. Like other battery powered equipment there are some obvious downsides to cordless chainsaws, most obviously they have restricted running time, but without the advantage of greater power as in the case of petrol powered chainsaws. We would again argue however that for the average domestic user the power output of a modern lithium ion powered unit is more than sufficient for domestic level work, and the running time (at between 45 minutes to an hour) is also more than enough for most peoples needs.

When most people think of chainsaws they think of petrol powered power houses used by lumberjacks in the Canadian wilderness (or something like that!), and to be honest it’s quite a fair stereotype. There aren’t that many occasions when the casual user would need to use a petrol chainsaw, so these are really reserved for those who have a serious amount of trees/large tree to cut down. Of course if you do have just such a job that needs doing then there really is no alternative.

Typically petrol chainsaws utilise a 2 stroke engine, these are very powerful for their size but have the disadvantage of having a shorter life span than the 4 stroke engine typically found in a car. Again, this shouldn’t proove to be a problem, unless you are using the chainsaw every day, in which case investing in the best quality model you can afford is imperative.

Aside from being more powerful than electric chainsaws, petrol models also tend to feature a longer cutting blade, which again makes them ideally suited to heavy duty work.

There might not be a power cable to worry about, but petrol chainsaws also have a couple of crucial safety points that need to be considered both before, during, and after use. Being driven by a combustion engine means that petrol chainsaws will inherantly get hot, therefore it is imperitive that it be turned off and allowed to cool down before refuelling, or being returned to the place where it’s stored. Prior to being returned to storage, petrol chainsaws should also be drained of fuel and oil, and the area they kept should be checked to see that it is adequately ventilated.