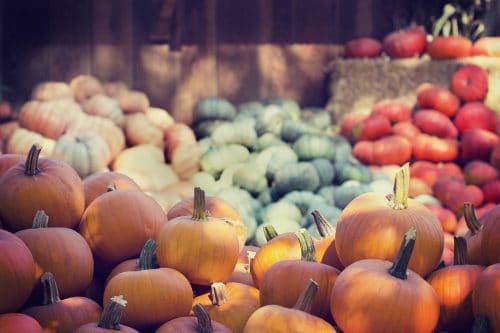 Halloween may be a little way off yet, but have you ever wondered if it might be possible to grow your very own pumpkins? These need not be simply for carving of course, pumpkins are a tastey and healthy alternative to other root vegetables such as squashes and sweet potatoes, and they make the perfect ingrediant to add to winter stews.

It just so happens that growing your own pumpkins, whether at home or on your allotment, is a a very achievable goal. With their shiny orange hues and gigantic appearance, there’s no satisfaction quite like that of seeing pumpkins plumping up beneath the sea of leaves that envelopes them.

There are of course many different varieties of pumpkin, from those with a blueish tint, such as the appropriately named ‘Queensland Blue’, to the deeper red of the ‘Rouge Vif d’Etampes’.

If you’re intending to grow your pumpkin(s) for their size, then any variety described as a ‘field pumpkin’ will produce the desired results. Of course being grown for their size means that less emphasis is put on their quality as a food, and indeed most are very stringy in texture, making other varieties better for cooking. The principles of growing and nurturing all types of pumpkin however are much the same.

One of the aforementioned ‘blueish’ skinned varieties, crown prince pumpkin is a great choice for roasting alongside parsnips thanks to its dense orange flesh, not to mention that it also tastes great and will last in storage for a good six months or more.

As well as having the best name of any pumpkin variety, Munchkin Pumpkins are another flavoursome choice. Again the flesh is a deep orange, and they look great as they grow, small though they may be.

Sweeter tasting than other types, this large pumpkin is ideal for soups and pies. The downside is that it’s harder to grow than some of the more bland varieties of pumpkin