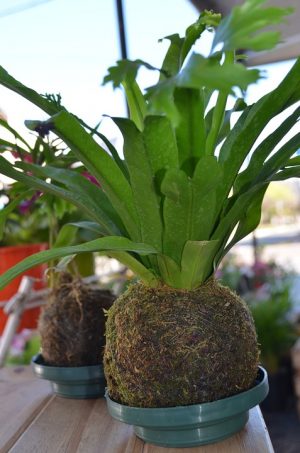 Here in the west we’re pretty well versed in Eastern culture, and as far as Eastern gardening goes, Bonsai trees are probably among the first things that come to mind. There is however a new kid on the block in the world of Oriental inspired gardening, and it goes by the name of Kokedama.

Literally translating as ‘moss ball’ Kokedama is the somewhat bizarre practice of removing house plants from the confines of their pots and hanging them up inconspicuously for all to see. For those who are big advocates of houseplants, who wish they could be more than just a forgotten novelty confined to the corner of a room, the Kokedama bandwagon could well be worth jumping on.

With its origins in Japan, and a slow decent through Europe, the US, and now here in Britain, Kokedama certainly isn’t for everyone. For some the sight of a disemboweled plant hanging up in a conservatory with its entrail-esque network of soil and moss and roots dangling ungraciously is probably a step to far. For those who relish innovation in all its guises however, this is a real treat for the eyes.

The precise process for creating Kokedama plants varies between one practitioner and the next, but the basic theory is to take the un-potted plant and remove all the original soil from its base. Next a mixture of Akadama (a clay like mineral traditionally used in Bonsai and other container based gardening) and peat is used to create a wet cake like mixture with which to envelop the roots of the plant. Finally the mud ball is wrapped in moss and the whole ensemble is bound with twine to hold it all together.

The traditional method for presenting the Kokedama plant was to mount it on a post, the idea of hanging it from a string or twine is a more recent innovation, with Dutch gardener Fedor Van der Valk really embracing the technique in his work.

Caring for Kokedama plants isn’t difficult, but you still need to maintain a fairly strict watering regime. Of course not being containerized does pose a bit of an issue by having the plants indoors. One technique is to remove the plant from its hanging/sitting space and submerging the moss ball in water for a minute or so. The plant can then be left to drain before being put back.