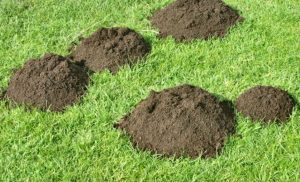 Perhaps one of the most irritating problems you might face as a proud lawn owner is damage caused by moles. There’s nothing worse than looking out of your window one morning only to see mole hills scattered all over your lawn, they create mess and damage that you could completely do without.

Despite the nuisance they cause, moles are obviously living creatures and it’s preferable to prevent them striking in the first place rather than have to use force to try and get them out. The best way to discourage moles is to get rid of their primary food source, earthworms. This might sound somewhat counter intuitive since you’ve probably long been taught that earthworms are an essential part of a healthy lawn, but that isn’t necessarily so, and you can learn more about this here.

If you do find yourself victim to a mole invasion there are a number of techniques you can use to get them out, though it’s debatable how effective many of these are. Sork Natural Mole Deterrent Bulbs

offer a humane approach to dealing with moles that looks promising, with the manufacturers claiming that you can expect to be mole free for up to two years with just one package.

A tried and tested (though potentially inhumane) method is to set traps.

To set a trap:

Once you’ve caught the mole, hopefully it will still be alive and can be relocated safely away from your garden.

Left: The easy set mole trap is a great option if you do choose the trap route thanks to its user friendly design and construction.

You might also have some luck with an electronic noise generating device that is designed to drive the moles away from the garden, which is great in principle, but if your garden is fairly large it might just drive them to another area of the garden instead.

If you’re really organised you can prepare for mole issues before you’ve even laid your turf (so obviously this solution isn’t much use for a lot of people)  but using mole netting below the turf is a sure fire way to stop moles from being able to come to the surface and leave behind mole hills in process.