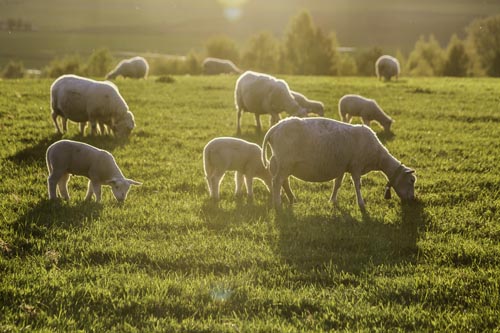 Most people tend to think of sheep as being the best option, probably because they do a pretty good job. In essence sheep aren’t fussy and will happily chew through anything and everything, including weeds, and because they aren’t too heavy and clumsy they shouldn’t destroy your garden in the process. One thing sheep certainly are not however, is intelligent. If there is somewhere they might get stuck, a sheep will get stuck there, so they are probably a safe option if you have a garden free of obstructions and railing that might cause them problems.

The next most obvious choice are goats, however they are less ‘lawn mowers’ as they are ‘shrub and tree mowers’. This means they won’t necessarily eat grass but they will eat weeds, nettles, ivy and other unwanted plant life. Unlike sheep goats are fairly intelligent, so hopefully won’t need rescuing from sticky situations, however they are climbers, so make sure you properly fence them in or else they might go astray!

Larger animals such as cows and horses will do a similar job to sheep, but are only suitable for much larger plots of land. A small garden will quickly be turned into a mudbath by heavy hooves, and let’s also not forget the amount of waste these animals produce!

Away from the mammalian world, other popular suggestions include geese and tortoises. Geese are decent grazers, and have the added benefit of being good guard animals. It’s well known how much of a racket they can produce if startled at night, and they also have a pretty powerful bite! This does of course have its downsides if for some reason they take a disliking to their owner!

As for tortioses, we’re not sure that it’s a practical solution to use such a slow moving animal as a lawn mower, but that said, in recent times there have been widely publicised projects to introduce giant tortoises to islands in the Galapogus that don’t feature native tortoises, to take advantage of their ability to hoover up everything within their reach, weeds and all.