When Uber arrived on the scene (not literally), the traditional way of doing business began to change into something never before seen. This previously unknown phenomena goes by the name “Sharing Economy,” which represents a broad term that refers to a commerce model involving groups sharing the use of goods and/or services. The sharing economy model has taken off in popularity, mostly because of the increase in the ways we connect electronically.

College and high school classes will eventually have to offer a course called “Sharing Economy 101.” When that day comes, expect Uber and Airbnb to represent the case studies that have led to other companies following the sharing economic model, as well as will lead myriad more companies in the future to adopt the same commerce principle. Considered leaders in the taxi and hotel industries, Uber and Airbnb have forced traditionalist companies within their respective industries to make rapid changes to take advantage of the surging sharing economy.

The Reasons Sharing Works for the New Economy

Sharing works because of pooled resources that simplify product and service transactions. People who choose to share provide consumers with quick and efficient access to products and services. You’ve probably heard the phrase “Economies of Scale.” The same principle applies to the sharing economy, with a slight twist. Businesses that operate using the shared economy model implement organization strategies. In other words, practitioners of the sharing economy offer better products and service at prices lower than the prices offered by the competition. For example, Uber does not own a fleet of taxis and Airbnb does not own real estate to offer hotel amenities.

Both companies act as middlemen that connect businesses and customers.

Is There a Limit To Sharing? 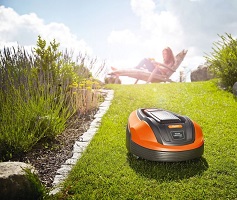 Products infrequently used and come attached with high price tags are perfect candidates for the sharing economy. Think of seasonal items such as boats, fishing equipment, barbecues, and above all, gardening tools and equipment. Robotic lawnmowers have transformed the way some homeowners cut grass. However, robotic lawnmowers are also still cost prohibitive and not used enough to justify paying the high price. The solution: creating a service that connects homeowners and lawnmower dealers that can rent out the smart lawnmowers on a per hour or a per day basis. Other high-end gardening supplies primed for the sharing economy include snow blowers and soil tillers.

It is not a matter of if, but when the sharing economy enters the gardening industry. By then, technology should be even more advanced to help push the here to stay economic model into the forefront of the British economy.