Anecdotal evidence and possibly personal experience will go to show you that whilst battery powered strimmers are great for convenience (a few hours on charge and away you go) as well as offering complete freedom of movement, they do still have some limitations particularly when it comes to thick stubborn grass. Put simply, more often than not they just don’t have enough power to cut everything before running out of juice. 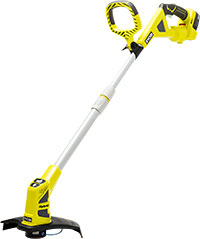 Keen not to be beaten by this problem, Ryobi have become the first company to produce a strimmer that’s capable of running not only on battery power, but when the situation allows, from a good old fashioned mains connection as well. The advantage of this it’s claimed, is that you’ll be able to switch seamlessly between the two power sources therefore only using the battery when you’re too far away from the reach of you mains socket,  the result being that you’ll be able to strim for longer and hopefully get the job done all in one go.

Well yes and no. It’s certainly true that it does allow you to do as intended and switch between ‘tethered’ and ‘untethered’ modes, but there are only specific circumstances in which this is going to be suitable for you. For example, if you have a fairly large garden and all the toughest grass happens to be furthest away from the mains plug, then you might still find yourself running the battery down, by which time it’s neither here nor there whether you still have the option of switching to mains power or not. In this case you might be better off getting a longer extension cable for your cheap and cheerful corded strimmer, or if you have a large enough garden, opting for a petrol strimmer instead.

So whilst it’s not a write off by any means, we suggest thinking carefully before taking the plunge with this strimmer, if it suits your needs then great, but if it doesn’t think again, you’ll pay a premium for the fact the RLT1830H offers the latest technology, and you might be able to save a few pennies by taking a different approach instead.

As time goes on more on more manufacturers will probably produce their own variations of this concept, by which time the prices will probably come down, making your decision on whether or not to buy one a whole lot easier.