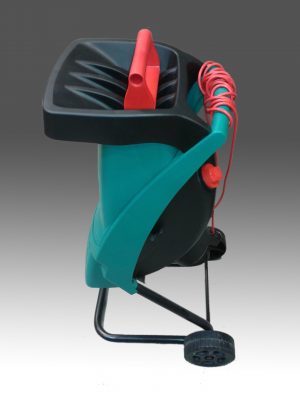 Most people have probably used a paper shredder for destroying confidential documents at one time or another, but did you know that a similar, albeit more powerful device exists for getting rid of waste in your garden? Garden shredders have become increasingly popular in recent years, especially here in the UK, and although it’s hard to say why that is exactly, one thing’s for sure, if you’re in the market for a shredder you’ll get a far better deal now than you might have done 5 or 10 years ago.

Most people use garden shredders for disposing of branches and stems, and indeed most manufacturers would strongly recommend against attempting to shred anything other than this type of material for a number of that reasons I’ll cover below, but the bottom line is, if you’ve got hedges, trees, and bushes that require regular pruning or trimming, then you’ll find a use for a shredder. If your only concern is the trees in your garden shedding their leaves, then a shredder probably isn’t the solution for you.

Shredders essentially sit in the middle ground between larger and more powerful ‘wood chippers’, and less powerful ‘mulchers’ – these are designed to shred and cut up softer green material such as leaves, while wood chippers can handle much larger pieces of lumber and tend to be driven by a combustion engine. As mentioned above, it’s not recommended to place leaves picked up from the ground into a shredder or chipper, primarily because there is a strong risk that stones will be present which could damage the blade or blades. Mulchers do not suffer from this problem because they tend to use a similar cutting mechanism as a strimmer, utilising a flexible plastic cutting line instead. The disadvantage of mulchers however is that they are incapable of shredding harder material.

As you might expect shredders vary in quality greatly, with some being more prone to conking out after just a few uses than others, so it’s certainly worth having some idea of which shredders are most reliable before buying. Other considerations include:

Before using a shredder you should approach the task with the same common sense in terms of safety that you would with other similar task, so the use of hearing and eye protection is recommended, as are gloves to protect you against thorns and other sharp material. 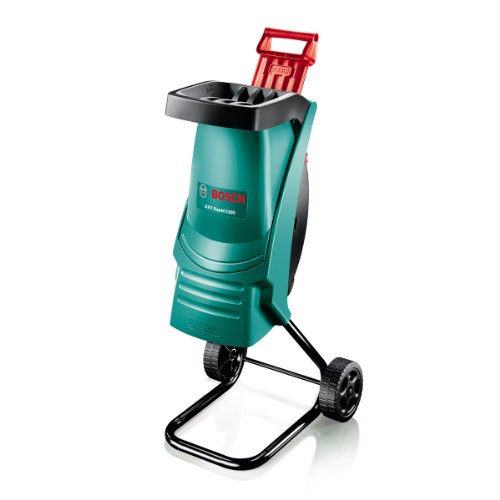 One of the most popular shredders currently on the market, the AXT Rapid 2200 is a great all round shredding solution, ideally suited to the needs of the average gardener. As the most basic model in Bosch’s range of shredders, it’s an affordable choice, but it doesn’t have a built in waste collection containers, nor does it feature any noise suppression. On the plus side it will make short work of any woody material of up to 40mm in diameter.

At just 12kg this is also the lightest of Bosch’s shredders, so it’s pretty accessible to all users, although it does only have a 4 metre power cable, so if you’re working some way away from your house or garage you’ll probably find an extension lead is essential.

In terms of cutting performance Bosch have pretty nailed it with all of their shredder designs, this one uses a simple rotating blade which is very effective when sharp, and has the advantage of being reversible when one side wears out. One of the great advantages of Bosch products is that spare parts are readily available, even long after products are discontinued. This is particularly important as far as this shredder is concerned as despite its double sided nature, the blade is likely to wear out far more quickly than on a tool such as a lawn mower, so being able to get hold of a spare without any fuss is a great advantage over lesser known models. Incidentally, on the subject of worn out blades, like other shredders this model doesn’t take kindly to having stones and gritty soil put into it, at best it will blunt the blade and at worst it will jam the cutting mechanism and do permanent damage.

As mentioned above, the best shredders make it easier and safer for you to feed in material through the top, and the AXT Rapid 2200 is no exception. The supplied plastic paddle is designed to span the full width of the opening, meaning that your efforts to push the material in are more effective than if you were simply using a narrow stick.

This is pretty much our go to choice of garden shredder, it’s reliable and doesn’t jam up easily, and for a tool that’s typically used a lot less frequently than most other garden tools, it should last you a very long time, even if you have to replace the blade from time to time. 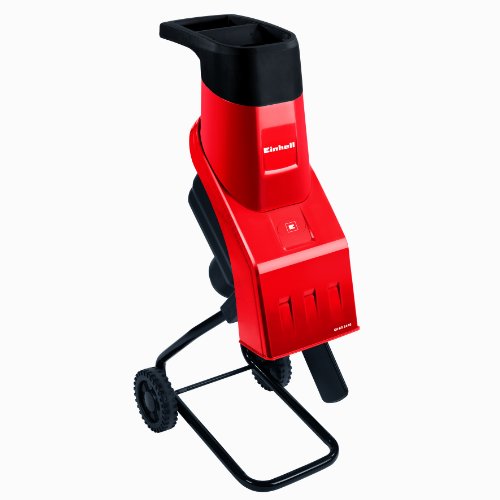 This is a pretty close second to the Bosch AXT Rapid 2200, indeed it retails at a much lower price than the Bosch and matches its performance in many ways. Where it falls down is in its ability to deal with larger volumes of waste product, partly due to its smaller opening, so you might find you have to break down some branches by hand more first before feeding them through the shredder.

Einhell are a great brand, and considering they compete in the market alongside giants such as Bosch, they do a fantastic job a developing products that really hold up well. With this shredder they’ve managed to condense the same great functionality we’ve come to expect into a low cost package that most other manufacturers would struggle to match.

The quality on offer here isn’t as strong as the Bosch shredder, indeed this machine is more likely to fail altogether compared to the Bosch shredder, but be assured Einhell are a company who take customer service very seriously, so you won’t be left in the dark if you do encounter problems. Spare parts are less readily available than other manufacturers, although you shouldn’t have too many problems tracking them down from Einhell themselves. 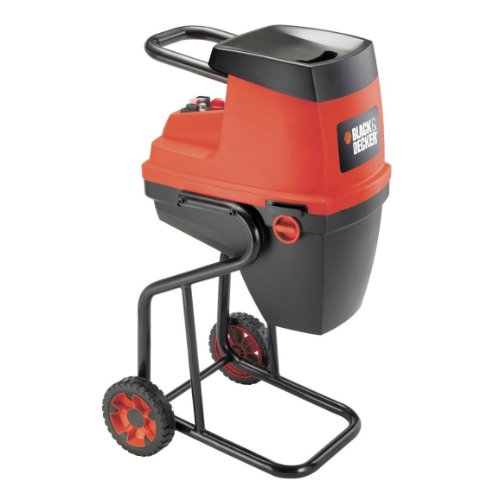 Black and Decker are pretty strong players in the garden tool market, and although this shredder is a good effort, where they really excel and stand out among the competition is in the strimmer market.

Like other shredders of this size the GS2400 is designed to cope with branches of 40mm diameter, and it does a pretty good job of it, there have been a few complaints from some disgruntled users that it simply crushes rather than shreds the leaves, although Black and Decker themselves boast that it does both equally well, and in fairness to them the people that have complained about this may just have needed to adjust the blade position slightly.

This is a much heavier unit than the Bosch AXT model, in fact at 35kg it’s well over double the weight, so if manoeuvring your shredder around the garden is important to you we wouldn’t recommend this as a starting point. The other major downside is that the power cable is a mere 3 metres long, so extension cable use is almost a certainly required.

On the plus side there is plenty room below the outlet of the shredder for placing a collection container, and indeed this model comes with a collection bag of its own.

There’s no doubt you’ll get a tried and tested bit of kit in the GS2400, and Black and Decker certainly aren’t short of experience in this field, though the truth is there’s just nothing to really make this shredder stand out from the competition. It’s not that it performs poorly, it’s just that there are other shredders that do a better job, and probably do it for a more reasonable price too.