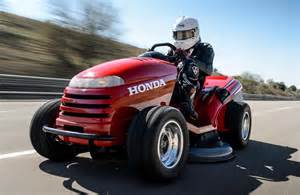 Lawn Mower Racing, it’s a past time that most people probably wouldn’t take too seriously, taking a machine that was intended to cut grass and turning it into a motor vehicle? It sounds almost laughable, but make no mistake there are many out there who take it very seriously indeed.

Believed to have been conceived in a pub somewhere in the north of England in the 1970’s, Lawn Mower Racing’s founding fathers wanted to experience the thrills of throwing an untamed vehicle round a track without the eye watering expense associated with more traditional motorsport. The idea was simple, take a ride on or ‘tractor’ mower, remove the nasty cutting blade, tune up the engine and off you go. It wasn’t long before the concept spread, and a calendar of events was in full swing on both sides of the Atlantic.

Fast forward to spring 2014 and as if to put to rest any ridicule or lack of respect that people may have for the sport, vehicle and engine giant Honda have taken Lawn Mower racing to the next level. Nicknamed ‘The Honda Mean Mower’, this beast is a highly modified version of Honda’s HF2620 Lawn Tractor capable of 0-60mph in 4 seconds, and of reaching a top speed of 116.57mph, smashing the previous record of 96.5mph, an impressive margin and therefore officially the world’s fastest lawn mower. 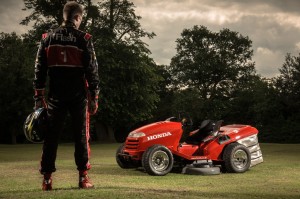 The handiwork of ‘Team Dynamics’, a partner organisation of Honda’s, the Mean Mower features a 1000cc engine, 6 speed gearbox, modified suspension system, and a whole host of other improvements that really make it less of a mower and more of go kart or quad bike on steroids. None the less, in order to qualify for the record of the world’s fastest mower the Mean Mower had to be capable of cutting grass, which it can do perfectly well with electric motors powering the cutting blade when driven at the more leisurely pace of 15mph.

So what do you think, would you take this for a spin? Personally I’m going to keep my feet firmly on the ground from the sidelines!