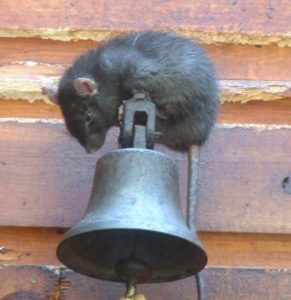 It would stand to reason that insects and animals that can hear ultrasonic frequencies above 20 kHz would respond in predictable fashion as well. This is the underlying basis of all ultrasonic pest repellent products.

One only has to observe the response of dog to dog whistles to know that the proponents of ultrasonic pest repellers have a good point. This household pet, affectionately termed man’s best friend, would perk up and lift its ears in rapt attention at the sound of a dog whistle in the ultrasonic frequency range of 23 to 54 kHz. Dogs are so all ears that dog whistles can be used as a training tool for bark control, recalls, and other training purposes. So much so that “dog whistle” is used as a term to refer to a coded message that means one thing to the general public while resounding in a different way to its targeted audience.

In short, ultrasonic pest repellers have a sound basis. It only became a problem when the makers of these products started to make more and more outrageous claims about their efficacy. This prompted the FTC to send a letter in 2001 to 60 manufacturers and sellers of ultrasonic pest control products advising them that claims of efficacy must be backed by real studies and research.

This is a 5-in-1 pest repellent for generating ultrasonic waves and ionic waves and manipulating the electromagnetic fields present in any building with electrical wirings, in addition to its nightlight and air purifier functions – so 5 functions in total. In fact, the US version also has an AC socket to make it a veritable 6-in-1 powerhouse!

Anyway, if we put our mind to it, it’s in our power toturn our vehicle into something like 6-in-1 too. The car can be marketed for the following functions: transportation, air conditioning, music listening, global positioning, lighting, petrol storage, and perhaps many more.

The most important function of this DigiHandy device is of course to repel pests. It does so in 3 different modes: ultrasonic, ionic, and electromagnetic. The manufacturer claims that it can drive away ants, spiders, mosquitoes, bugs, mice, rodents and roaches. We know that mice and rats can get accustomed to electromagnetic waves, but with this thing there are triple waves for the poor rodents to deal with.

This is an indoor electric power pest repeller. It’s rated to have a massive coverage area of 5000 square feet, which, if true, the coverage area would extend far outside a normal size house.

This is a good outdoor ultrasonic pest repeller by Pest Beater. It’s a battery-powered device. There’s an automatic solar charging function for the 3 rechargeable AA batteries, so if you have enough sunlight you can just install it outside and forget about it.

This ultrasonic pet repeller has a motion detector built-in. It generates ultrasonic waves only when motion is detected. In addition to saving battery power, this is more effective than continuous ultrasonic frequencies because this method has a behavioral correction property to it. Creatures like cats, foxes, rodents and dogs would learn not to comeback instead of getting used to some continuous noise.The effective radius of the motion detector is 25ft. 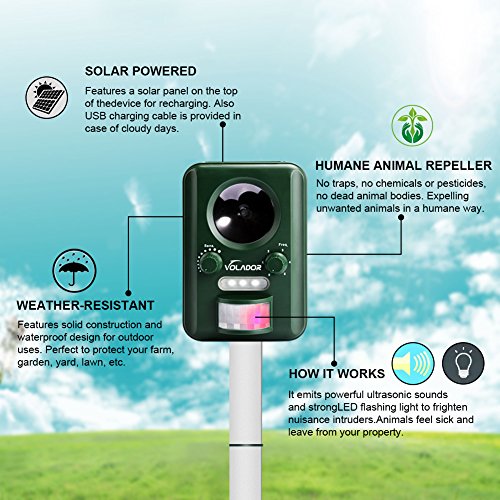 From the appearance alone this Volador ultrasonic pest repeller looks exactly like the Pest Beater repeller above. They both share the same chassis and utilize similar technologies but there are a few differences in implementations. For one, this motion detector is effective up to 30 feet.

The frequency ranges are also different. For the Volador, setting number one is 13.5 – 17.5 kHz and number two is 15.5 – 19.5 kHz. These are both audible high frequency ranges that humans can hear, especially kids who at their young age tend to retain better hearing at the highest audible frequencies. Only the third setting of 19.5 – 23.5 kHz is truly ultrasonic.

Like the Pest Beater, this one uses 3 rechargeable AA batteries. The batteries are charged via USB or the solar panel installed on top of the unit. 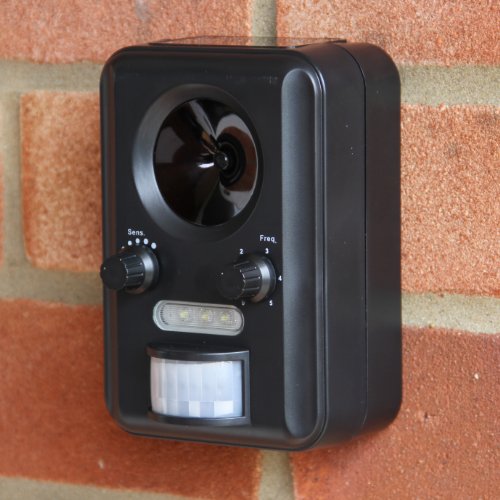 Once again this Frostfire ultrasonic pest repeller looks just like the Volador and Pest Beater units except this one is in a handsome black chassis. They are not the same device. This Frostfire version is actually the original and the best.

This ultrasonic pest repeller was tested to work especially well against stray cats. Stray cats love leaving droppings on people’s yard and this device will keep them away. It’s also effective against dogs and rodents.

It detects motion from up to 22ft away. The motion-activated ultrasonic noise can be set to difference ranges with a knob on the face of the unit. It comes with a stake for securing the device in the yard.

Is it a good idea to use just one motion detector? Security companies certainly don’t think so. Likewise, pest control effectiveness increases significantly when you strategically plan and install a group of these Frostfire ultrasonic devices.

The AG-So-So ultrasonic repeller is particularly effective against cats, foxes, dogs, mice and other rodents.In fact, this is the best ultrasonic pest repeller for rats.

It has a much better motion detector than the smaller units discussed above (Frostfire, Volador and Pest Beater). The Infrared PIR motion sensor sweeps at a 100-degree arc. The effective range is 25ft.

It’s a battery-powered clean energy design with an 800mAh solar cell for charging the batteries. This solar cell is oversized and works reliably.

Industry studies and independent research found that ultrasonic pest repellers worked in general but their effectiveness was inconclusive. They were found to have no effect on some pets and to work with other pests, though even when they were found to have worked the results were difficult to quantify and sometimes even disputed.

Let’s talk about the reported effects of ultrasonic devices on each pest. You’ll find some of the conclusions and rationales to be so logical that it will make you wonder if the researchers approached the studies with preconceived conclusions.

First of all, birds, despite their high-pitched chirps and twitters, have a narrower hearing range than humans. They can’t hear ultrasonic frequencies, and therefore ultrasonic devices wouldn’t repel birds. Be wary if you come across an ultrasonic pest repeller that claims to work on birds.

What is the best ultrasonic pest repeller for mice? This is one of the most frequently asked questions, a testament to the repulsiveness of mice. Rodents can hear up to about 75 kHz which is well into the ultrasonic range. They respond with confusion and annoyance to ultrasonic devices but not for long. In time mice and rats would grow accustomed to ultrasonic frequencies as they do other obstacles. There are those who claimed that ultrasonic pest repellers worked well on rodents if used in conjunction with traps because they would be so distracted as to become unaware of traps. There is no proof to that assertion even though it appears to have its basis in sound human logic.

Bats can emit noise in the audible midrange and also deep in the ultrasonic region. They are not known to respond to ultrasonic devices. In fact, according to the Florida Wildlife Control, there are no known products that repel bats.

As for insects, the only ones on which ultrasonic pest repellers have been demonstrated to have an effect are crickets and grasshoppers. In tests cockroaches responded to ultrasonic frequencies at times with fidgety motions but did not move away from the soundwaves. Ultrasonic pest repellers also haven’t any proven effects on offensive insects such as flies, mosquitoes, ants, fleas, wasps and moths.

Claims of efficacy by makers and sellers of ultrasonic pest repellers are on firmer ground with respect to animals such as dogs, cats, and foxes. Even with these animals ultrasonic frequencies have something closer to a deterrent effect than repellent. For example, ultrasonic noise is unlikely to stop a fox hell-bent on a pet chicken.

The Arguments For and Against

The arguments for ultrasonic pest repellers are that they are safe, affordable and long-lasting. It was only when the manufacturers and sellers of these ultrasonic devices claimed that they werea more effective alternative to traditional pest control methods that they got in trouble with the FTC.

Indoor ultrasonic pest repellers run on either battery or electricity and the outdoor units tend to run on battery (and some with solar charging). It’s definitely true that these ultrasonic devices last much longer than baits and pesticides. They are also very affordable. Even the best ultrasonic pest repellers can be so affordable as to give you pause. If something is so miraculously effective and long-lasting, shouldn’t it be very expensive?

Perhaps the best argument for having an ultrasonic pest repeller or two is that there aren’t any grave consequences if the devices don’t work as advertised. But on the off chance that they do, how wonderful would that be?

The safety of these devices, on the other hand, has been disputed by some. There are those who claimed that some of these devices emit ultrasonic frequencies at such high amplitude that their pet rodents became distressed. All in all, these ultrasonic devices are perhaps not the best choice for use around those who are known or suspected to be hypochondriacs. Believe it or not some have accused inaudible ultrasonic waves of causing headaches and other health issues.