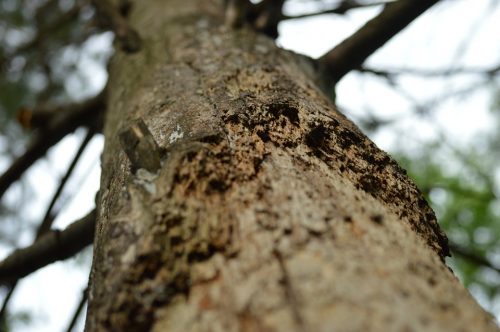 Whilst you might think that larger trees in particular are built like brick… er, tree houses(!) the fact is that even the most well established of our favourite natural structures can become damaged, sometimes beyond repair if you’re not careful.

The part of a tree most susceptible to damage is of course the bark, as the area of the tree most consistently exposed to the elements the bark is the tree’s frontline defense against parasites and pathogens. Should the bark become damaged and the inner phloegm layer, in other words the trees circulatory system, will be exposed and prone to infection which could then negatively impact on the whole tree.

The chance of lasting damage to the tree depends on how much bark has broken away, typically anything less than an area that covers less than a quarter of the tree’s circumference can be nurtured back to health, but anything greater than half the circumference and you would do well to consult an expert on the subject as it could well be touch and go that the tree will survive. In every case the tree must be closely monitored at all stages.

Clearly the most serious level of damage is when a strip of bark that covers the entire perimeter of the tree has been removed, known as girdling. You might think this is a pretty unlikely scenario, but it only takes a few repeated prangs from a lawn mower or strimmer line for the base of the tree to end up in this situation.

One simple method of protecting a tree in this case is to have a mulch perimeter around the tree rather than grass, this way you never need get too close to the tree when cutting the grass, taking away the risk of damage by this method.

As soon as you notice that a tree in your garden is damaged you should begin treatment. The course of action you should take will depend on the severity of the ‘wound’

If the damage is a scratch resulting in the removal of a fine sliver of bark, then the tree should make a full recovery. All you need do is clean the scratch with warm soapy water to remove any potential pathogens, and keep a close eye on the tree, which should heal within a year.

If the tree is partially girdled then you will be able to get away without grafting on bark, although it is advisable to tape, or wrap around with cling film, a layer of damp moss to the wound to promote the movement of nutrients across the damaged area. Again, with careful monitoring you should see the wound start to recover within a year

When the damage is severe, and potentially life threatening, your best chance of success is to graft an area of bark onto the damaged area. You can either use the same bark that has been removed during the damage (if available) or use what’s known as ‘scion’  bark, which is a strip of bark from the same species that will support the same nutrient transfer as the wounded tree.

You should ensure that the direction of the bark ‘grain’ is facing the same way as the bark on the tree so that nutrients are able to move across the bridging piece. To fix it in position you should cut and peel back a small area of bark above and below the wound that will act as a clamp for the bridging piece. For additional security string or twine can be used to make sure the clamp remains tight, but under no circumstances should you use any type of adhesive.