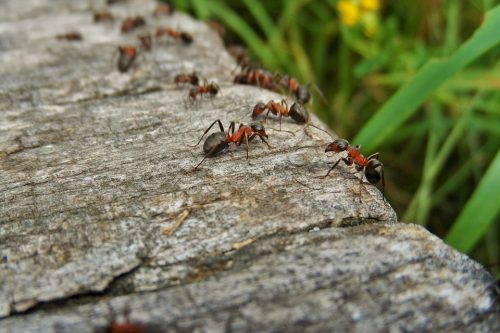 There’s nothing worse than seeing a rogue ant, then a few moments later discovering several more, before discovering you’ve got a full infestation on your hands. Whether they’re in your house or in the garden, when ants take up residence where they’re not wanted it can be a real headache to deal with them.

Luckily in the UK our ants are for the most part harmless, though that doesn’t stop them being a nuisance. The good news is that there are a number of ways that you can tackle your ants, both organically or if all else fails, by using chemicals. Let’s take a look at some of the most popular:

Ants like sweet things, which is why they can often be found in the corner of a kitchen tidying up spilled orange squash. You can use this to your advantage by making any of a number of sticky concoctions that the ants will be drawn to. Some popular recipes include sugar mixed with honey or peanut butter, which you can then place in a container to trap the ants in the vicinity of their nest.

Use Citrus Products as Poison

Citrus oils are poisonous to ants, so an effective control method can be to make a citrus oil based spray, which also includes sugar and water. Alternatively you can use orange or lemon peel, boiled and blended to similar effect, although this will need to be spread rather than sprayed.

Although most commonly, and most effectively used against slugs, there are varieties of nematode that will also target ants and other insects. Essentially acting as parasites against the ants, these microbes are most effective when applied directly to the ants nest. For best results you should also aim to apply them to several times over a period of two to three weeks to ensure there are sufficient numbers of living nematodes present at any one time.

If all else fails you might want to try chemical deterrents for controlling your local ant population. If you choose to go down this route you have two principle options, either a poisonous bait, or pesticide.

The advantage of poisonous bait is that the ants will take it back to the nest where it will be shared around to slowly kill off the population, however it is just that, a slow process.

A pesticide works well, but it will only have an effect on the ants it makes contact with, so you want to aim to target the nest if you possibly can, if not you will only ever be killing off part of the problem rather than the root cause.