It’s a fact that things get dirty over time or with repeated use, and when they do they obviously need to be cleaned. When those things are cars, patios, external walls, and other outdoor furnishings and equipment, the usual tool of choice is either a garden hose, or warm soapy water with a sponge and elbow grease. Sometimes though, neither of these will methods cut it, so for really stubborn grime the only tool powerful enough for the job is a pressure washer.

Since its inception in the mid 20th century the basic pressure washer concept has more or less stayed the same; water is blasted at high pressure through a hand held nozzle, literally scraping dirt away like a knife. Most domestic grade pressure washers are powered by a mains powered electric pump and mains water supply, which is straightforward enough, but where things get more confusing as you browse the marketplace are the more subtle differences between models.

The most important factor of all is the pressure output of the washer. You’ll see that pressure washers pump out water at anything between 100 and 150 bar, and which you choose will determine what type of work you’ll be capable of carrying out. Lower pressure washers of up to about 100 bar are suitable for cleaning things like mud from a bicycle, and the grime from inside a ‘wheely’ bin. Medium rated washers of around 115 bar are best for cleaning cars, and things like lichen covered fences, window frames or guttering, whilst higher pressure washers are best for cleaning really stubborn grime from patios, heavy machinery, and anything else that even with the best will in the world you wouldn’t be able to shift with a soapy sponge. Deciding on which is the best power washer for home use, will largely come down to what type of muck you need to shift, and of course how much of it there is! 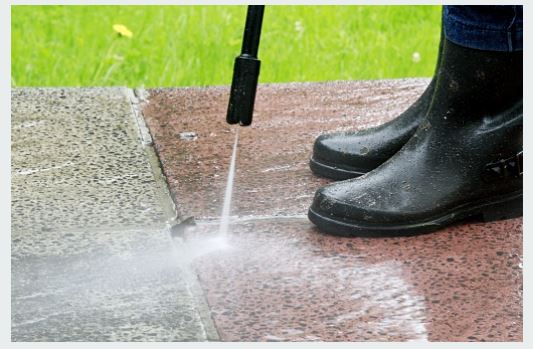 Perhaps the second most important deciding factor after pressure is safety. Pressure washers are potentially dangerous at the best of times, especially with higher pressure models water is ejected with such high velocity that it is sometimes capable of stripping human flesh from the bone! Clearly then they must be used with great care, and never let loose in the hands of children. We also recommend wearing goggles to protect yourself from flying debris that may be kicked up by the water spray, and sturdy footwear to protect your feet from the water jet. You should also bear in mind that with a pressure washer you are working very closely with both electricity and water at the same time, never normally a great idea, and therefore it can lead to disastrous results if the tool isn’t respected. The main thing you must do is ensure you have an RCD (residual current device) either built into your plug socket, or between the plug and socket. This will immediately cut the power in the event of a problem, reducing the possibility of electric shock. Besides the care you must exercise, it’s also worth paying attention to what the manufacturers have done to make sure you stay safe, chiefly whether there is a pressure release valve present on the washer. This is important should pressure in the device build to a dangerous and need to be released.

Keeping to a Budget but Maintaining Practicality

It’s also worth giving some thought to how quickly a pressure washer delivers water as obviously this will have an effect on the amount of water you consume, which is particularly critical if you’re on a water meter. The last thing you want is to be happily working away with your pressure washer for hours on end only to have a mild heart failure when you later receive your water bill! The good news in general though, is that pressure washers use far less water than using a garden hose alone, so they are always going to give you at least some saving in the water department.

Weight is also another pretty important issue with pressure washers. It’s pretty likely that you’ll want to be able to move around with it a fair bit, especially if you’re cleaning a large area like a patio, and if so you’ll want the pressure washer to be as light as possible so that carrying and moving it is feasible. You’ll also need it to be lightweight if you plan to work at height, up a ladder to clean guttering for instance. This wouldn’t be easy or safe if the pressure washer was heavy. It is likely to be a trade off between pressure and weight, as higher spec washers are likely to be heavier given the greater power of the pump driving them. As a rough estimation you’ll normally find that domestic grade pressure washers are somewhere in the region of 5kg.

Something else that should come as standard with any pressure washer is an air cooling system to draw heat away from the motor as it generates heat, you might not think it but generating the level of pumping power required takes a lot of work!

As mentioned above, these are the de facto choice for most consumers, and usually with good reason. Electrically powered washers are also more than adequate for many businesses, for example those in the professional gardening, window cleaning, or grounds maintenance trades.

Running at very high pressures these gas guzzling beasts are usually overkill for most domestic applications, and their two thousand or more PSI of pressure should only be handled by those who are confident they know what they’re doing.

These are pretty handy for dealing with tough grime in a similar manner to hot water. Typically A solvent or detergent mixture is fed into the water stream as it is ejected from the device’s wand. Many domestic grade washers feature some form of detergent integration system, so it’s definitely something you should look out for.

Hot water pressure washers are less commonly used in a domestic setting, but it’s worth being aware of what they’re capable of, particularly if you run, or plan to run a commercial operation or cleaning business.

Just like the combination of hot water from a tap and soap cleans the dirt from your hands better, so too does hot water when dealing with particularly tricky cleaning problems. For example when cleaning non water soluble dirt such as oil and grease, a hot pressure washer is a must. This is why you’ll typically find them located on factory floors and petrol stations where the likelihood of a chemical spill is far greater than elsewhere.

Clearly cold pressure washers can’t compete with their hot water counterparts when it comes to overall versatility, but where they do win is on price. As ever money talks, so unless you have a specific reason, a cold water pressure washer is always going to be your first port of call.